Whew! It’s been quite the experience blogging on Florence. Time is flying fast, and I am late posting  a seasonal topic since I needed to concentrate on Florence beginning seven days ago. Don’t worry. At the end of this Climate Lottery post I will be adding much more important information on Florence, which was downgraded to a depression this morning, including some aerial video footage . *This post will be linked in the upper right hand part of this site’s home page all season long  under The Climate Lottery: Fall 2018 Contest.*

*The Climate Lottery is a forecast contest free to play by giving your picks in an e-mail. No prizes will be given out for the contest, which is for educational purposes only this time around. The main purpose for the contest is to make people interested in National Center for Environmental Information climate products. The special account that I have set up for the contest is guywalton10@gmail.com* This time I will make a personal pick, following along with any players.

The National Center for Environmental Information ranking numbers for average temperatures of the lower 48 states for fall 2018 will be posted on or shortly after October 7th, 2018 which will be the official “Climate Lottery” numbers of the contest. Any subsequent changes by NCEI after their initial posted rankings will not be valid for the contest…but those ranking numbers will change with time. The winning Climate Lottery numbers for summer (JUN, JUL, AUG 2018)  were 122/114/108 with a Power Ball number of 121 for the season.

Hello again to all weather and climate geeks out there.  Summer 2018 turned out to be a very hot season for most of the United States. If you wish to play “The Climate Lottery” pick three numbers between 1 and 124 (with 1 representing the coldest possible ranking and 124 being the highest possible ranking) for September, August and October 2018. Also, pick a “Power Ball” or overall ranking number for summer 2018 between 1 and 124. The Power Ball ranking will serve as a tiebreaker for any close picks between contestants. Your picks are NCEI rankings for average temperatures across the lower 48 states. Since 2018 is the 124th year that the National Center for Environmental Information has been ranking years since 1895 all months for 2018 will have a warmest ranking of 124. Those for 2018 will have a range from 1 to 124. The coldest ranking would be the number 1. Please give your picks to Guywalton10@gmail.com before October 5th, 2018. If you wait until just before October 5th to make your picks, you can make an educated guess as to what the ranking for March will be (and, also a heads-up guess for April). All data can be found at the National Center for Environmental Information site noted here: https://www.ncdc.noaa.gov/temp-and-precip/us-maps/1/201702#us-maps-select

Chances for an entire season of below average temperatures are becoming much less likely across the lower 48 states due to carbon pollution. The whole point of these posts is to demonstrate how skewed temperatures have become towards warmth due to climate change. Of course, as far as the globe goes, the larger an area that is compared to averages, the more likely that area is to be above long term averages. What has happened, so far, this decade is yet more proof of the climate lottery game being loaded for warmth in the United States. Balls coming out of the Climate Lottery hopper are likely to have high numbers, which was indeed the case for the summer. It is still possible, though, to have a cold, anomalous month as happened in April 2018.

Here’s a breakdown of the National Climatic Center’s ranking numbers for Summer 2018, which was the 4th warmest spring on record (or a Powerball ranking of 121):

The following is a breakdown of each month for Summer 2018. Each chart shows “Climate Lottery” numbers for each state (or rankings) from a scale of 1 to 124. In June the overall ranking for the lower 48 states was 122 (out of 124):

California saw its warmest July on record. Just like in 2017 the West Coast saw a very hot, smoky summer where, unfortunately many wildfires occurred exacerbated by the heat.In August 2018 the overall ranking for the lower 48 states was 108 (out of 124):

In August it was the Northeast’s turn to see a record warm month. New Hampshire, Massachusetts, Rhode Island, and Delaware had a record hot August.  The West remained very hot. The central U.S. did see some relatively cool conditions.

The following are the rankings, so far, for individual months or “climate lottery number picks” for the 2010s:

The average ranking for 2018 is 62 since the coldest ranking would be 1 and the hottest 124. I have color coded all rankings for this post at or below 42 blue and all those at or above 82 red with rankings + or – 20 from the mean value of 62 black. With time, the rankings for each individual month, season and year will change as more data becomes available from NCEI. Also, for reference, the annual or “Mega Ball” numbers are shown on the chart. The mega ball number for 2017 was 121 meaning that 2017 was the third warmest year on record for the lower 48 states. Now this is important…The last three years have had at least a top four ranking for the U.S. The year 2012 remains the top dog seeing the hottest year on record.

Seasonal or Power Ball rankings for winter are those for DEC/JAN/FEB, spring are MAR/APR/MAY, summer JUN/JUL/AUG, and fall SEP/OCT/NOV. Also, keep in mind that NCEI rankings for seasons compare and are not merely an average of rankings of individual months of a season or year as was the case for Summer 2018- 122/114/108/P.B. 121:

Notice that since the start of 2010 only four out of thirty-five seasons have been below average or “blue.” Twenty-six out of thirty-five seasons since 2010 have been “red” or above average. Indeed, the Climate Lottery hopper is very much loaded for above average temperatures for the lower 48 states looking at recent history. The last fifteen seasons were all red and ranked at or above 100. Yes, the “casino of climate averages” is cheating causing the “house of warming” due to carbon pollution to win just about every season.

I hope that everyone will have a great fall. Try to stay cool.😎

The following are some of todays news and climate items in association with Florence:

(As usual, this will be a fluid post in which more information gets added during the day as it crosses my radar, crediting all who have put it on-line. Older items are at the end of this list, which will be archived on this site for posterity.)

I know it might not seem like a serious danger, especially if you’ve never experienced it, but even after the rains finally stop, the river flood disaster that could unfold this week might require some of you in SC/NC/VA to evacuate – go if told by local officials. #Florence 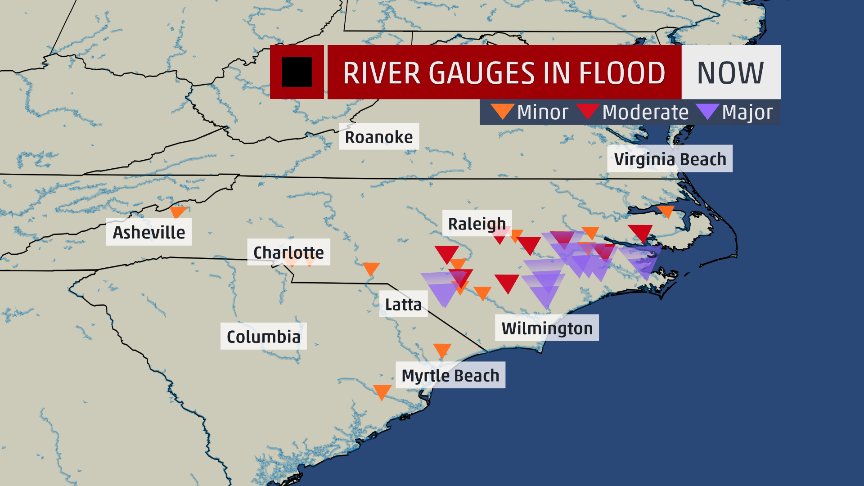 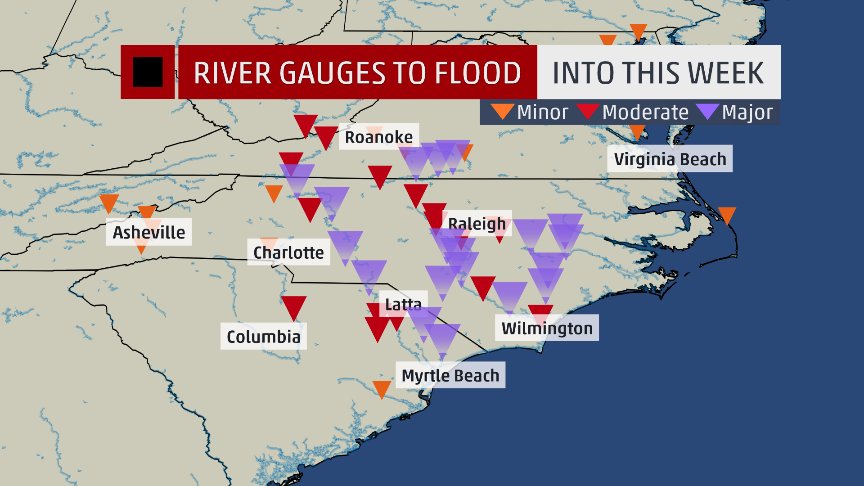 Please RT! Avoid I-95: Drivers told to ‘go around’ North Carolina. These photos are from I-95 in Lumberton, NC, as of Sunday a.m.  http://via.wtvr.com/jXbKT 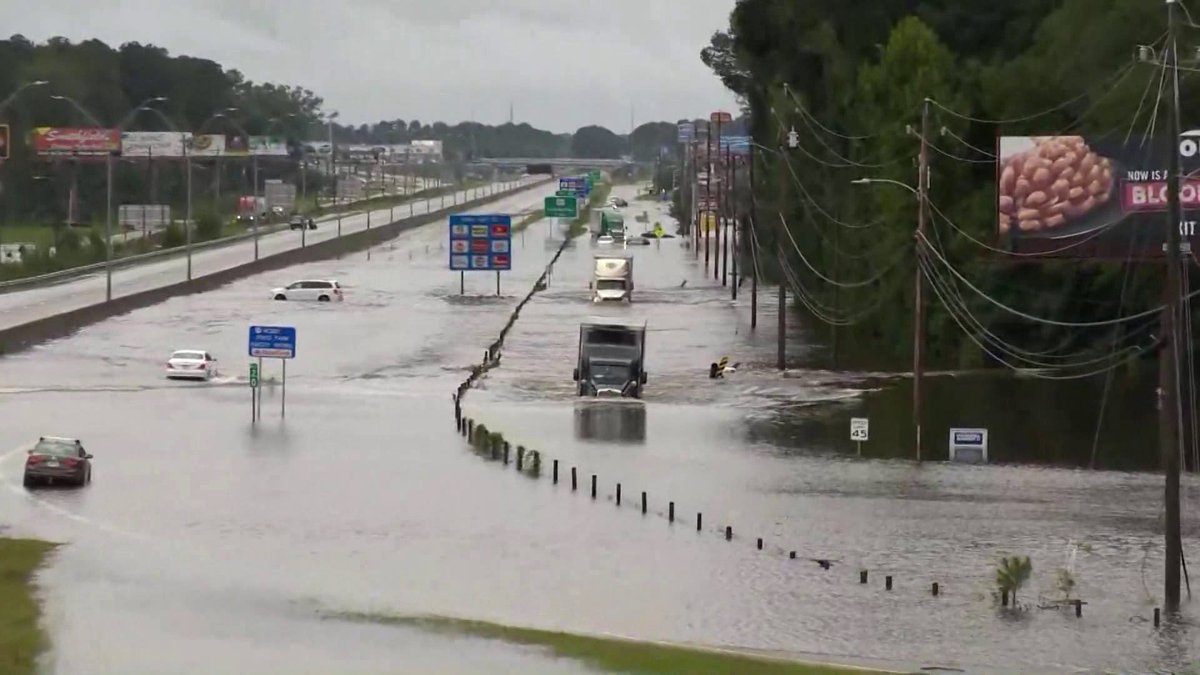 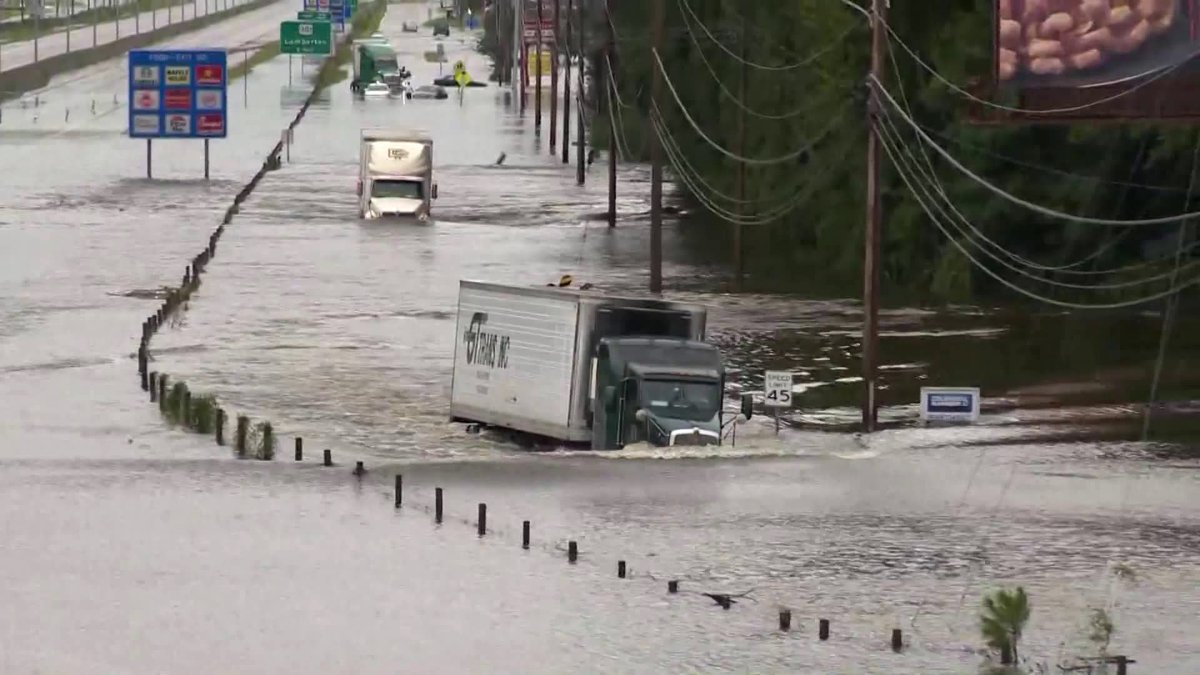 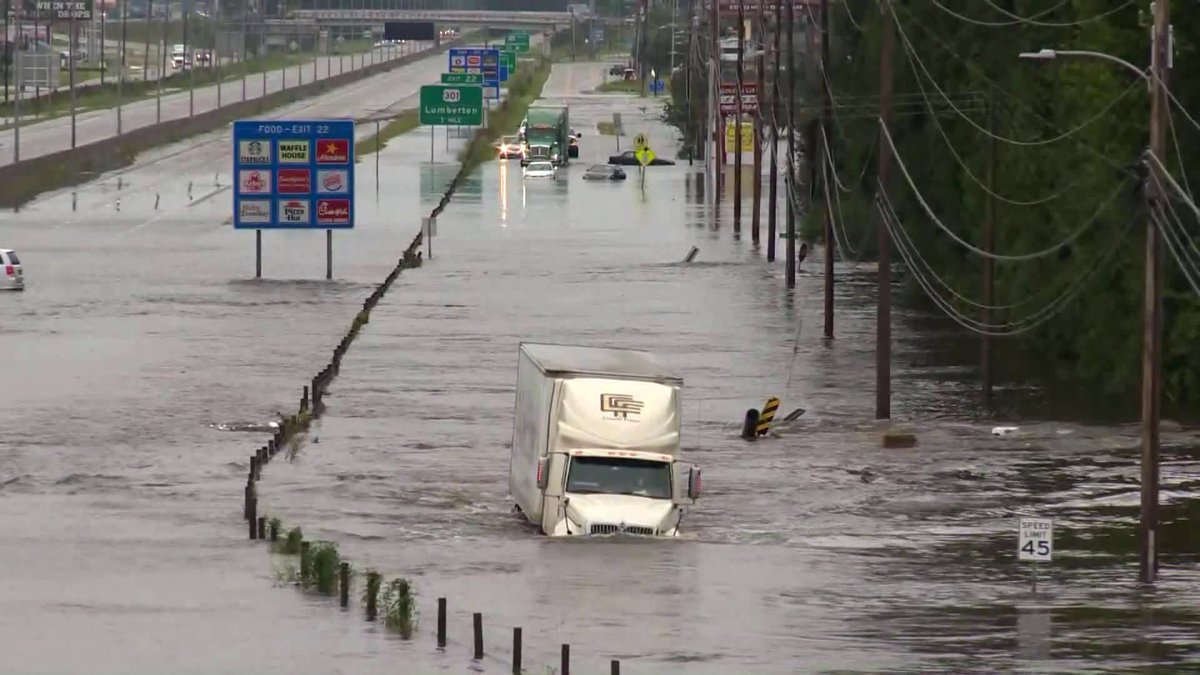 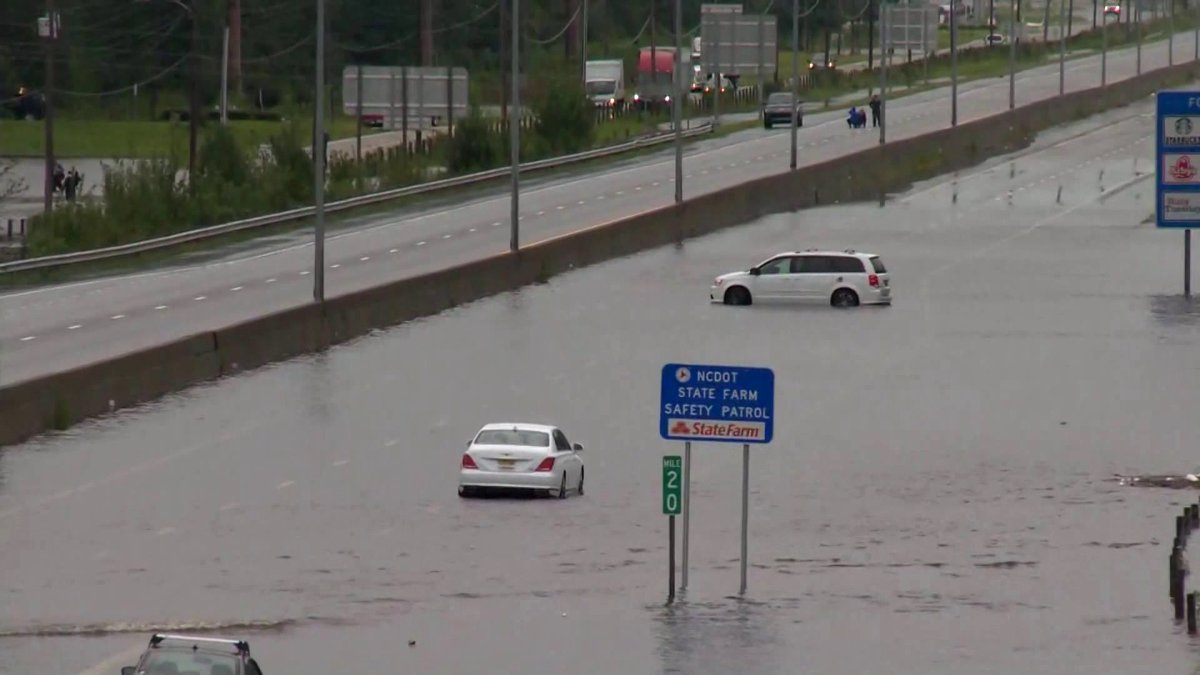 Greg Diamond‏ @gdimeweather
So it’s pretty much impossible to get out of Wilmington.  Most if not all major routes are flooded 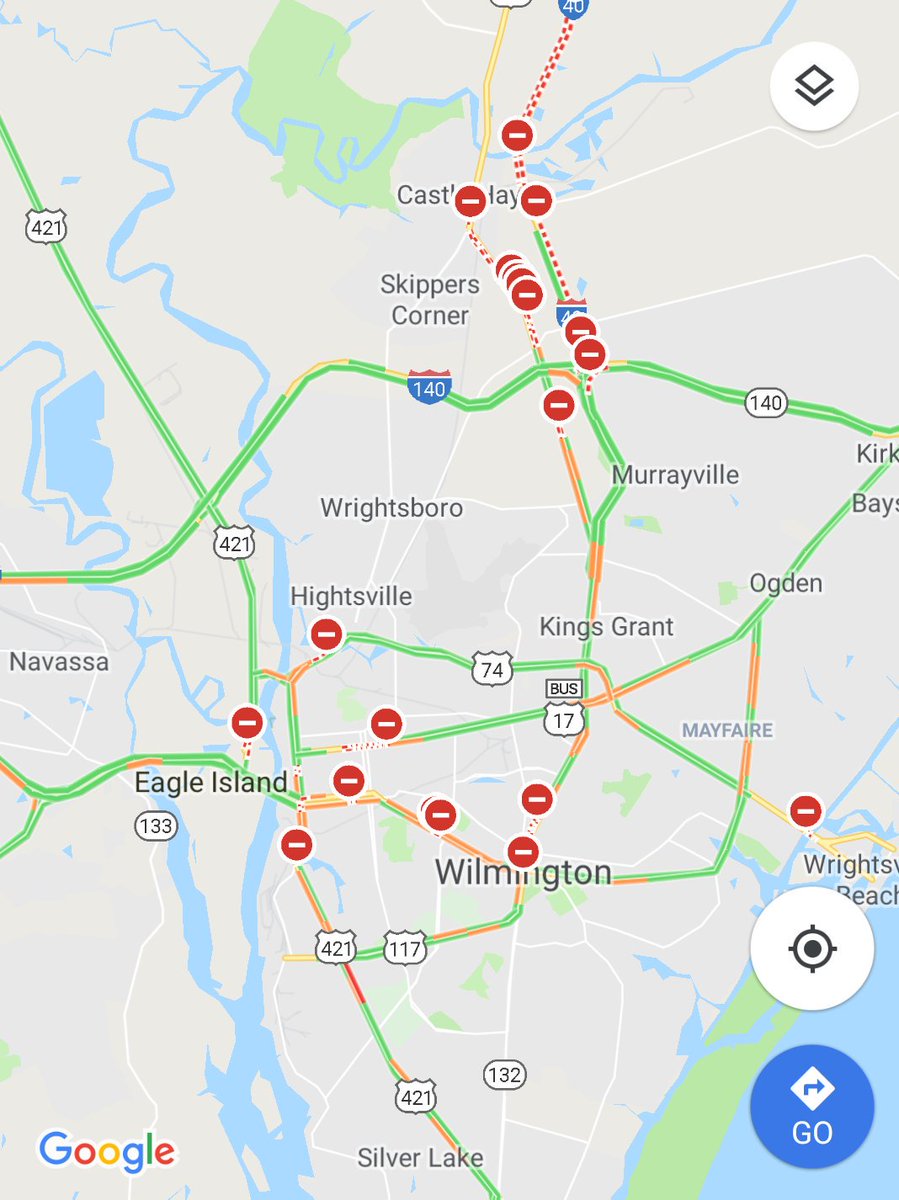 Flash flood warnings now into southwestern Virginia and western North Carolina. Increasing risk of not only flooding but also landslides in mountainous areas. Included in these warnings are I-40 between Asheville and Greensboro and I-77 both sides of NC/VA border. #Florence pic.twitter.com/0VXznGbPxR

After #Florence: Your house has flooded. Here’s what you should do. – USA TODAY https://www.usatoday.com/story/news/2018/09/15/tropical-storm-florence-expert-advice-flooded-houses/1322798002/ … via @GoogleNews

Updated preliminary rainfall totals across North and South Carolina from Hurricane Florence received as of 2 pm Sunday.  Heavy rain continues to fall across central and western portions of North Carolina and Virginia. 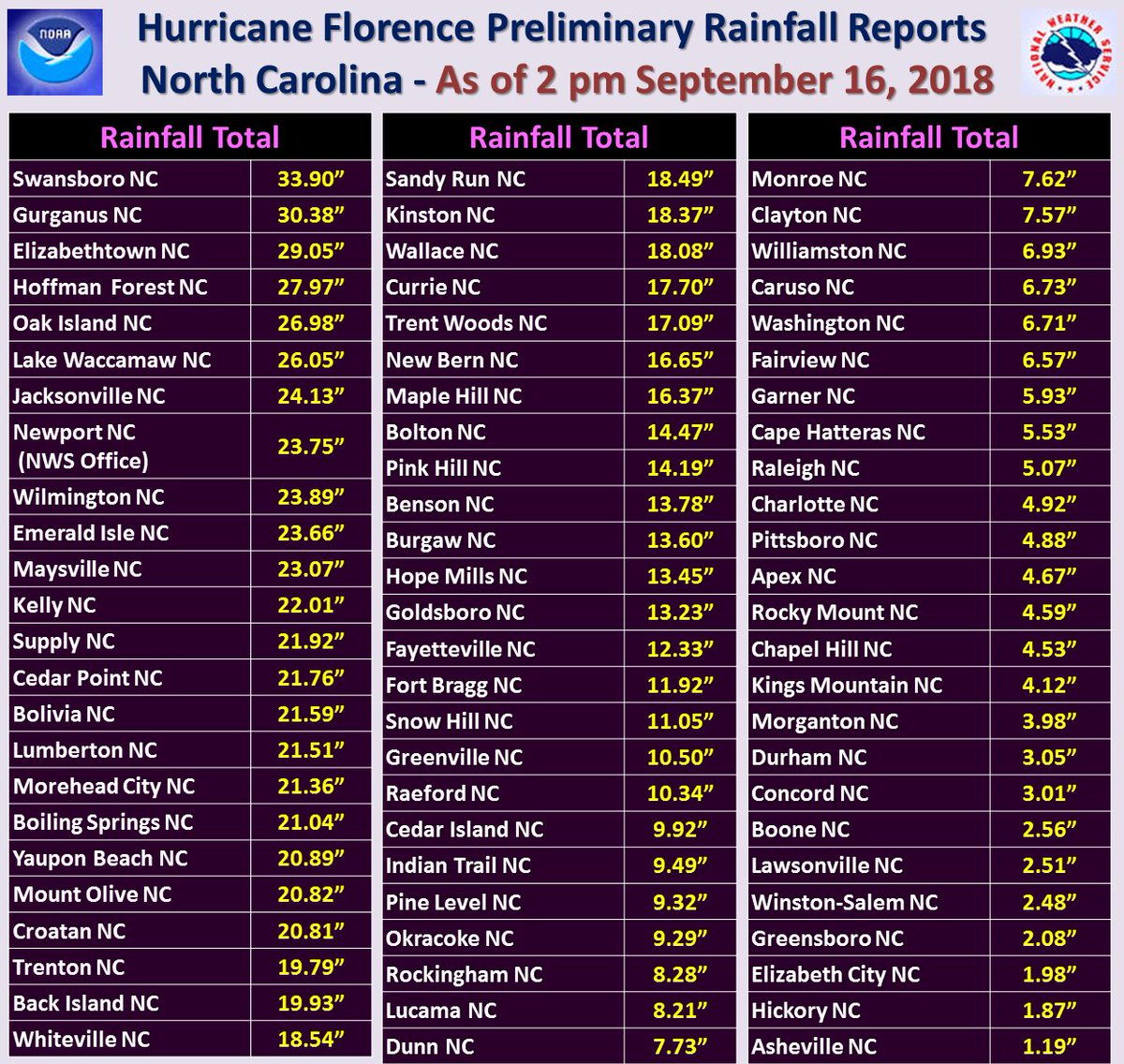 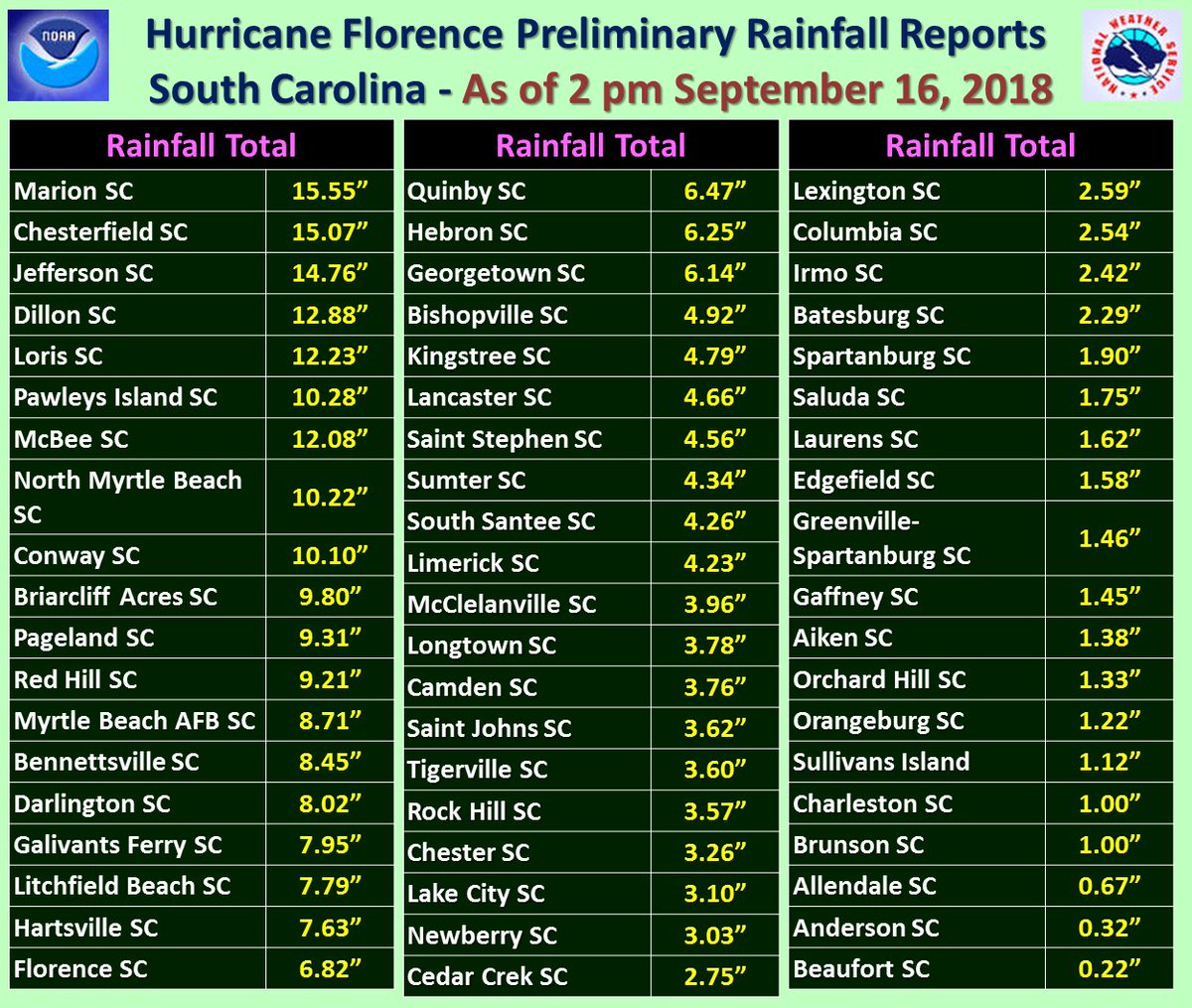 Flooding from TD #Florence continues to worsen and expand across the heart of North Carolina. Sunday will be a rough day for NC—and Florence’s remnants still won’t be done with the eastern U.S. https://bit.ly/2NdCuBb 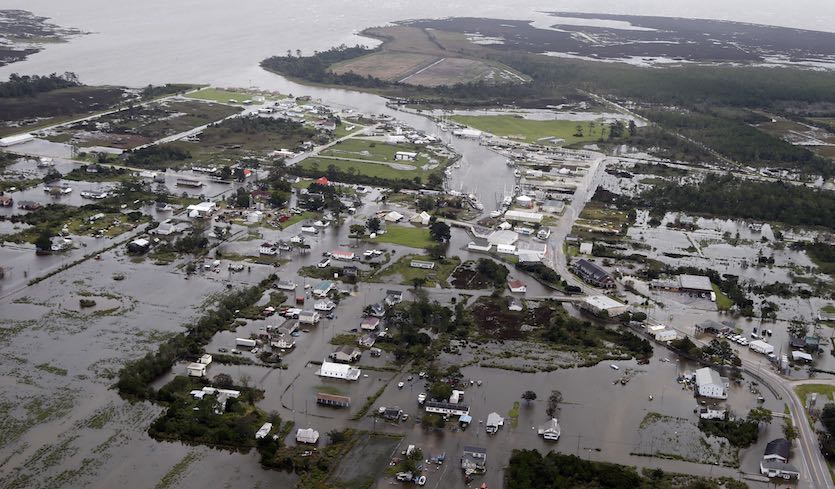 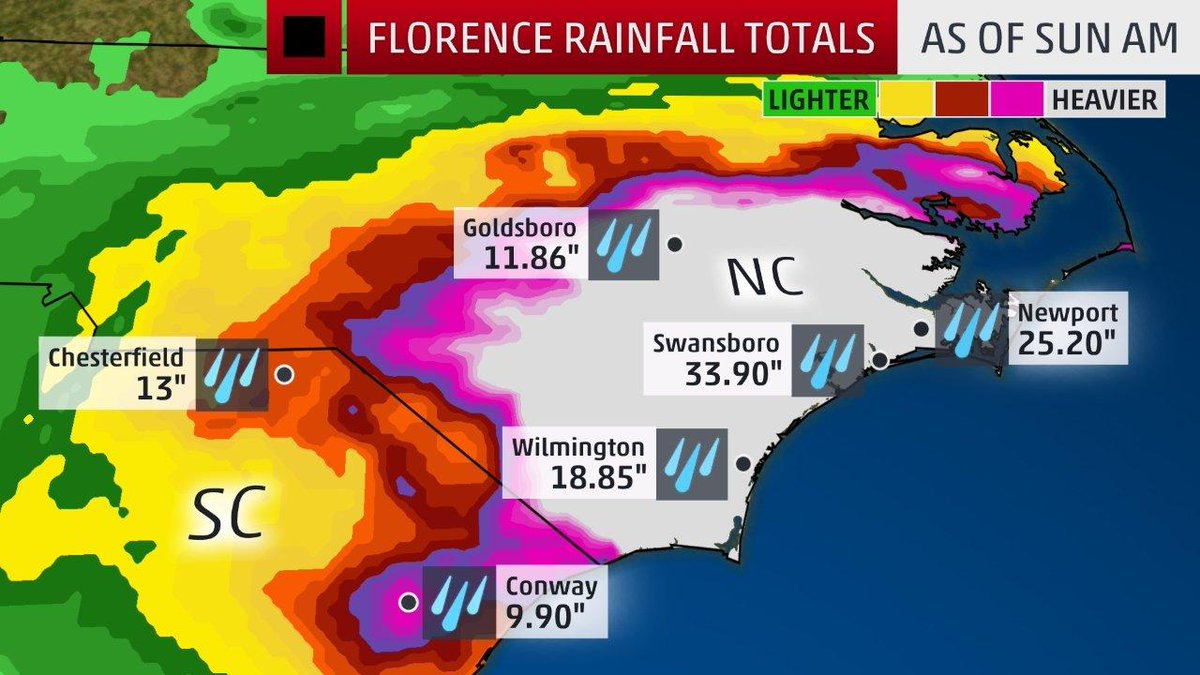