Sunday October 14th… Dear Diary. The main purpose of this ongoing post will be to track United States extreme or record temperatures related to climate change. Any reports I see of ETs will be listed below the main topic of the day. I’ll refer to extreme or record temperatures as ETs (not extraterrestrials)😊.  Here is today’s main climate change related topic:

Due to reporting on Michael I’m a little late to the party to comment on the new, terrify IPCC report. Much was written last week on what the Intergovernmental Panel on Climate Change pronounced, such as this article: https://www.commondreams.org/news/2018/10/09/whats-not-latest-terrifying-ipcc-report-much-much-much-more-terrifying-new-research

It strikes me that the Earth is facing a huge ticking time bomb, and James Bond is not around to diffuse the thing. Collectively, we have a scant decade to do so. Today I’m reposting much of what I wrote about relative time from one of my first posts on this site to perhaps spur a few more procrastinators to action: https://guyonclimate.com/2017/02/22/post-9-time-flies/

I noticed the following article about arctic sea ice loss this week:

What struck me was not so much the results, but the fact that the reported study began in 1979, the year I graduated from high school. Briefly, the article reported that Claire Parkinson, now a senior climate change scientist at NASA, began her groundbreaking Arctic sea ice study that year, which is accurately predicting what is happening in 2017. Published in 1979, Parkinson’s study found that a doubling of carbon dioxide in the atmosphere from preindustrial levels would cause the Arctic to become ice-free in late summer months, probably by the mid-21st century. Per climate scientists, the Arctic hasn’t been ice-free in more than 100,000 years. The 100,000-year figure struck me, also.

The concentration of CO2 currently in the atmosphere is around 405 parts per million. At the rate of the current business as usual rise, of 3 ppm per year and an initial pre-industrial level of 280 ppm, 560 ppm or a doubling of CO2 as mentioned in the article will occur around the year 2069, so humanity may have a little more time to get its act together on carbon pollution. The scary thought is that Claire Parkinson’s study is verifying , and the year 2069 is a scant 19 years past the year 2050…..just like 2017 is a scant 19 years past 1998.

I will refer to when the Arctic is free of sea ice during the summer as a tipping point. Once the Arctic Sea is nearly totally exposed to sunlight, surrounding areas, such as Greenland, will be affected by the darker albedo of ice-free ocean producing much more rapid melt of glaciers and ice on land. The melt, in turn, will greatly increase the rate of sea level rise such that most coastal cities must adapt very fast. Some cities won’t survive what will probably happen after the year 2070.

Arctic areal sea ice charts also began in my graduation year of 1979. The most current chart as of this post is shown here:

As you can see, the areal extent is at a record low…. No surprise here. In conclusion, climate change is happening now. Tipping points will probably occur in the mid- 21st century when most people reading this post will still be alive. Why is this important? Because anyone reading this and living past this decade may experience the dire consequences of climate change if the Arctic tipping point occurs.

Only after less than a couple of years after writing this post in 2017 on relative time just in the U.S. alone we have witnessed some of the most devastating wildfires in California’s history; Harvey, Irma, Maria, Florence and Michael; all serious game altering climate change events. It’s scary to me what has occurred since beginning this site. My writing wasn’t urgent enough on this post.

Now we are faced with an even shorter time frame to get our climate house in order than what I was writing about…just until about the year 2030. The time between late 2018 and 2030 will go fast. Does anybody remember what they were doing in the year 2007 or 2008? It seemed like yesterday that I was taking a nice vacation across Europe. Perhaps you also have good memories from the 00s. Think about how little time has passed between this decade and the last. Be scared that the 2020s will pass by year by year very fast.

The first essential thing to do is to vote in politicians who recognize the climate problem for what it is next month. Next, and only after we get good people in charge of the EPA and other entities, I’d like to see some coordinated plan between the U.S. government and various energy industries to have a step by step, year by year plan for the 2020s. Needless to write any more…time is fleeting and urgent.

Here are a few climate and weather items that I saw in social media today:

One of the strongest #SantaAna wind events in decades developing over SoCal (& w/strong winds also across NorCal). There has been some recent rainfall in some regions that may locally mitigate #wildfire risk,but in other places fuels near peak summer dryness.#LAwind #CAwx #CAfire

SAWTi Forecast @sawti_forecast
Across Los Angeles and Ventura Counties, this upcoming Santa Ana event is expected to be the 4th strongest in 35 years.
7:28 PM – 14 Oct 2018 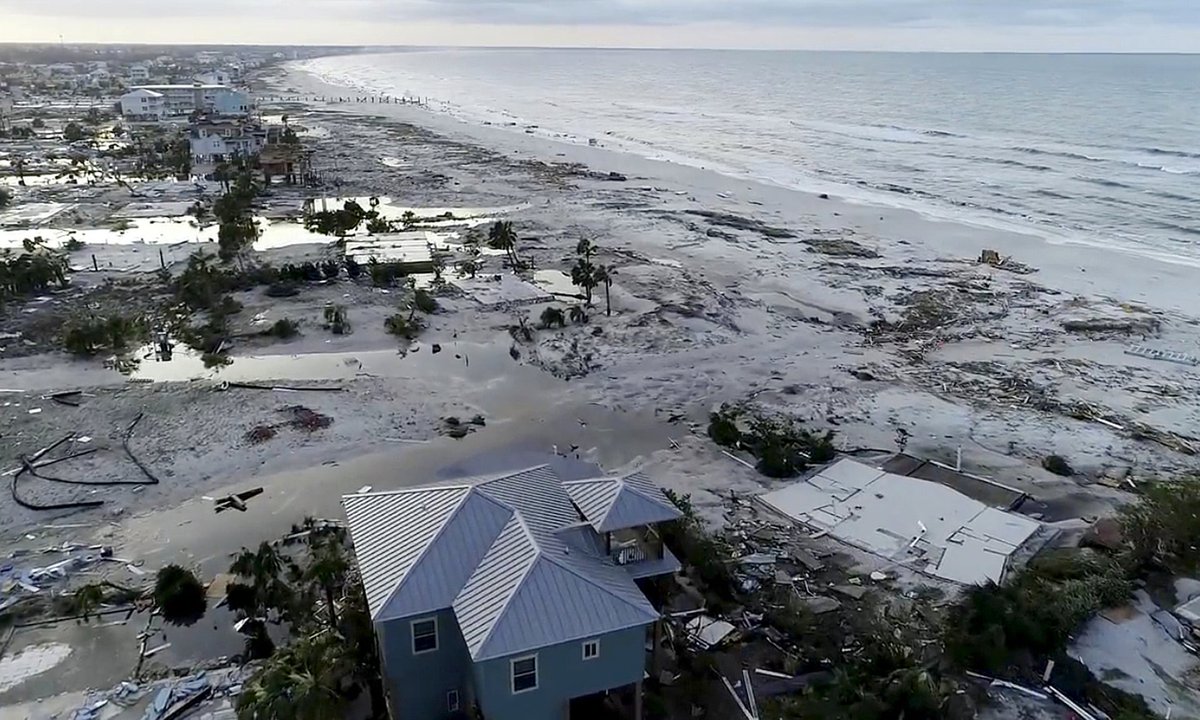 These #solar panels use the sun to make water. Solutions are everywhere.

The crew salvaged useable pieces of the UF wind tower near Tyndall’s south runway that failed after reporting gusts of 130 mph during Hurricane Michael. 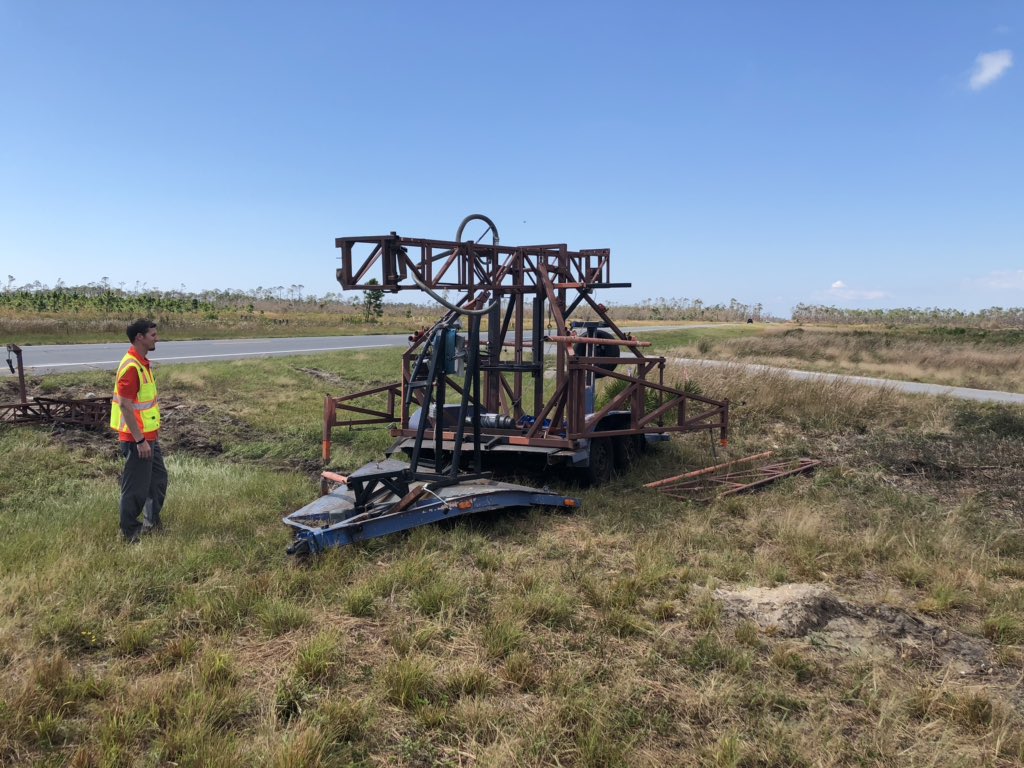 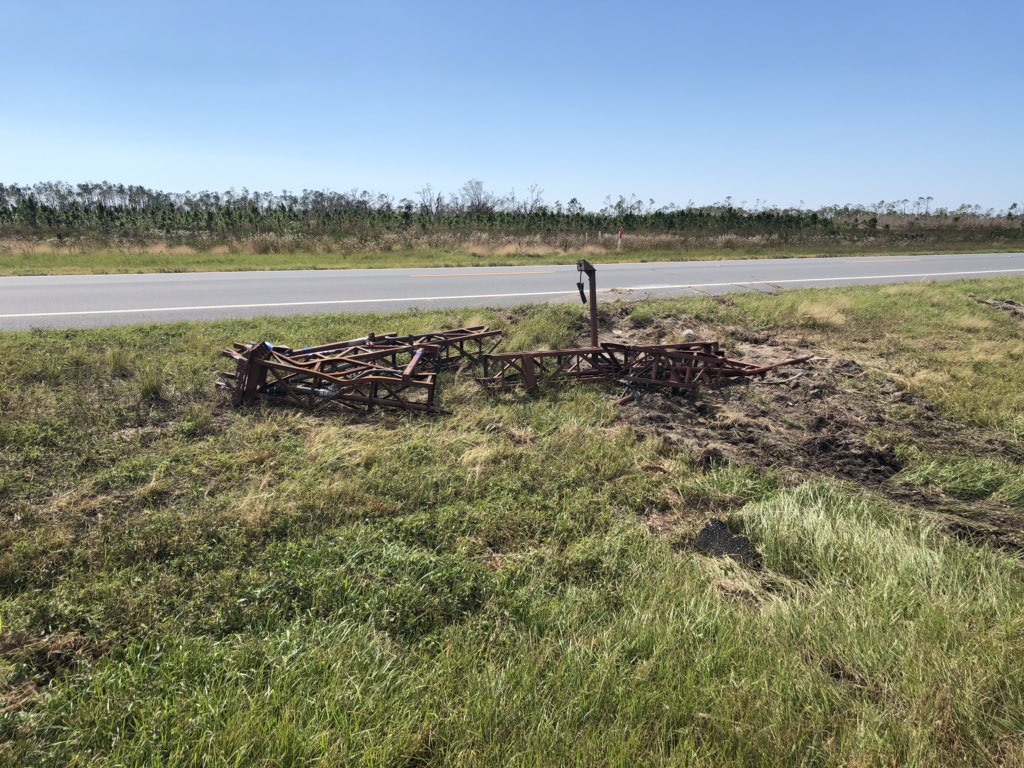 “Sunday Toons of the Category 5 Distraction Moment” http://bradblog.com/?p=12748  – This and MUCH more in @PDiddie‘s latest weekly toon collection… 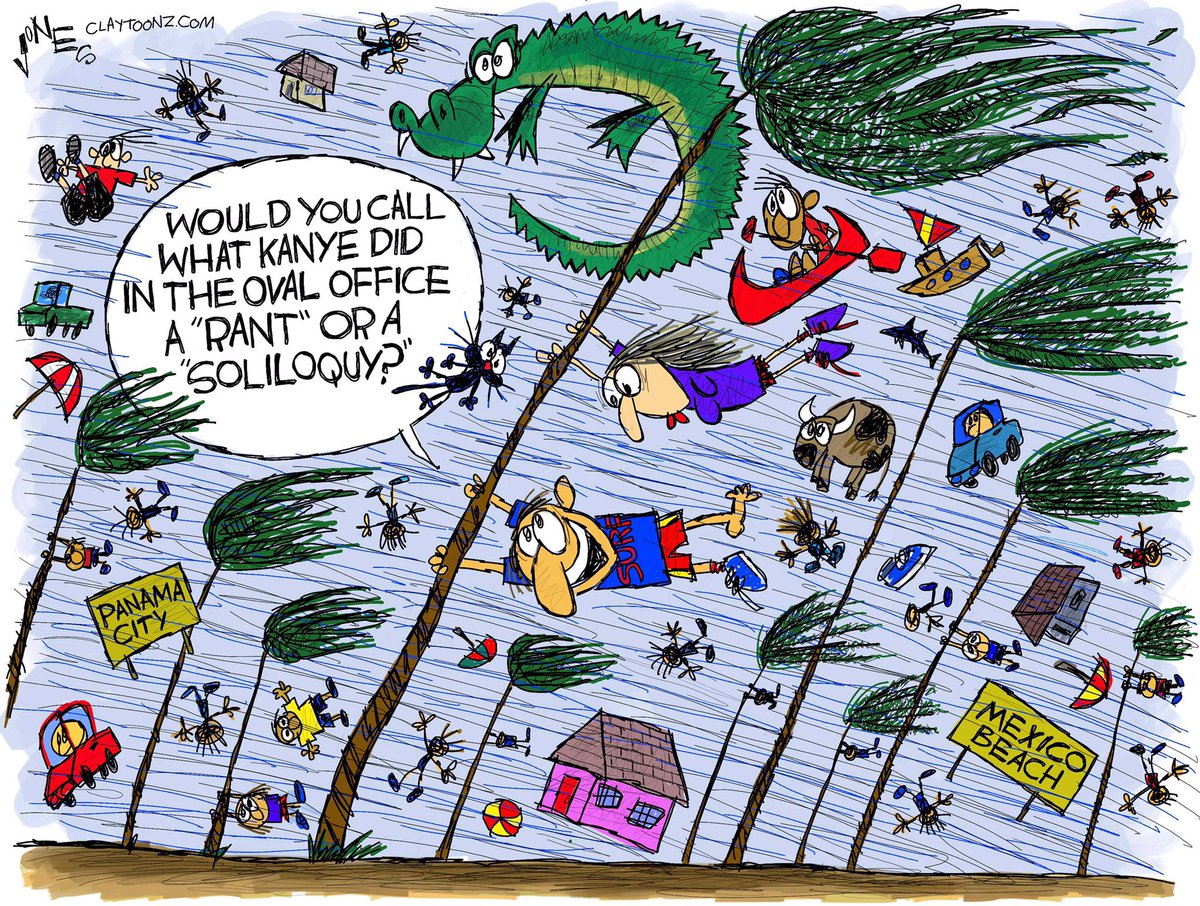 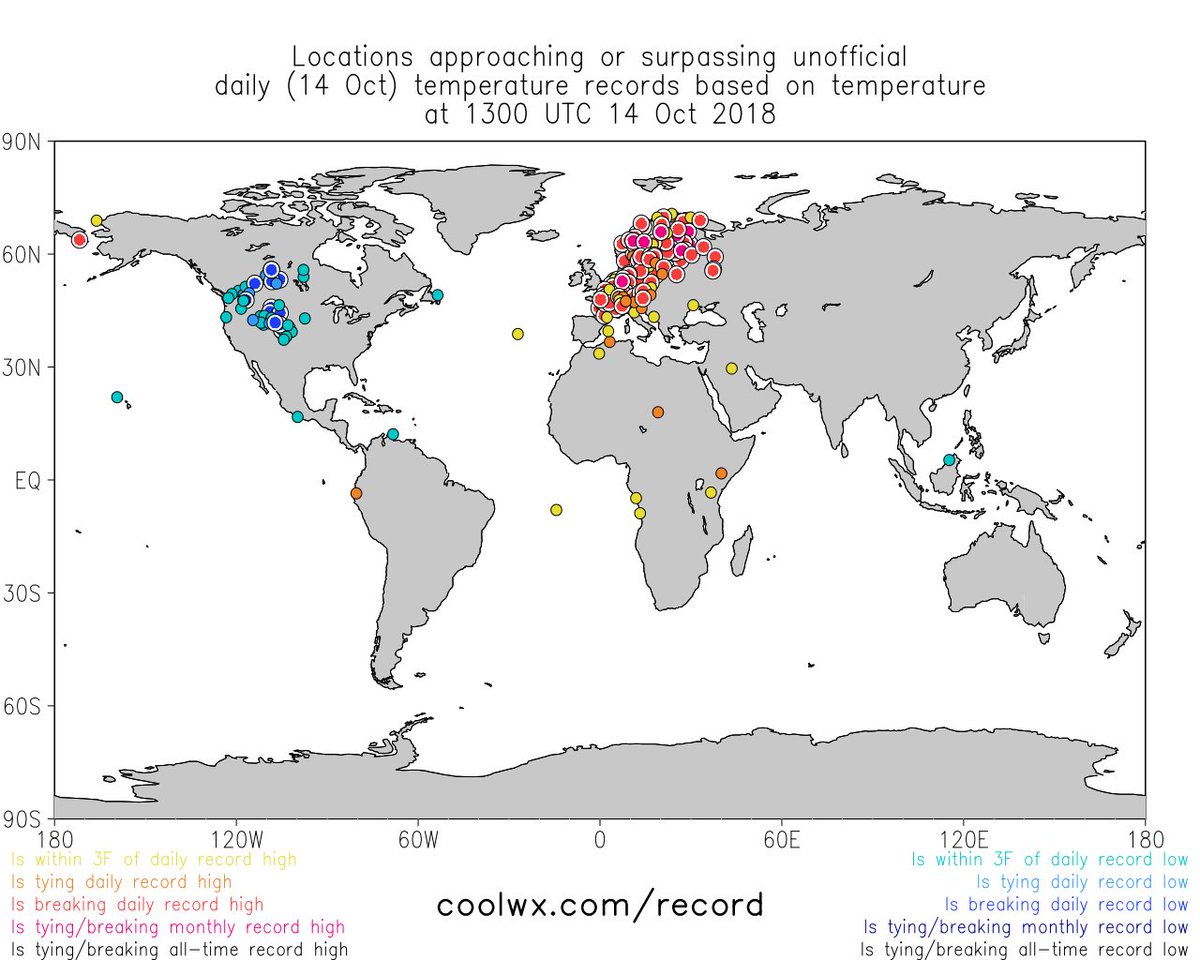 Incredibly warm day in Finland: the all-time highest temperature for October was broken by a whopping 1.5°C difference, and the previous record (from 1985) was exceeded in >20 stations. And we are already in mid-October. 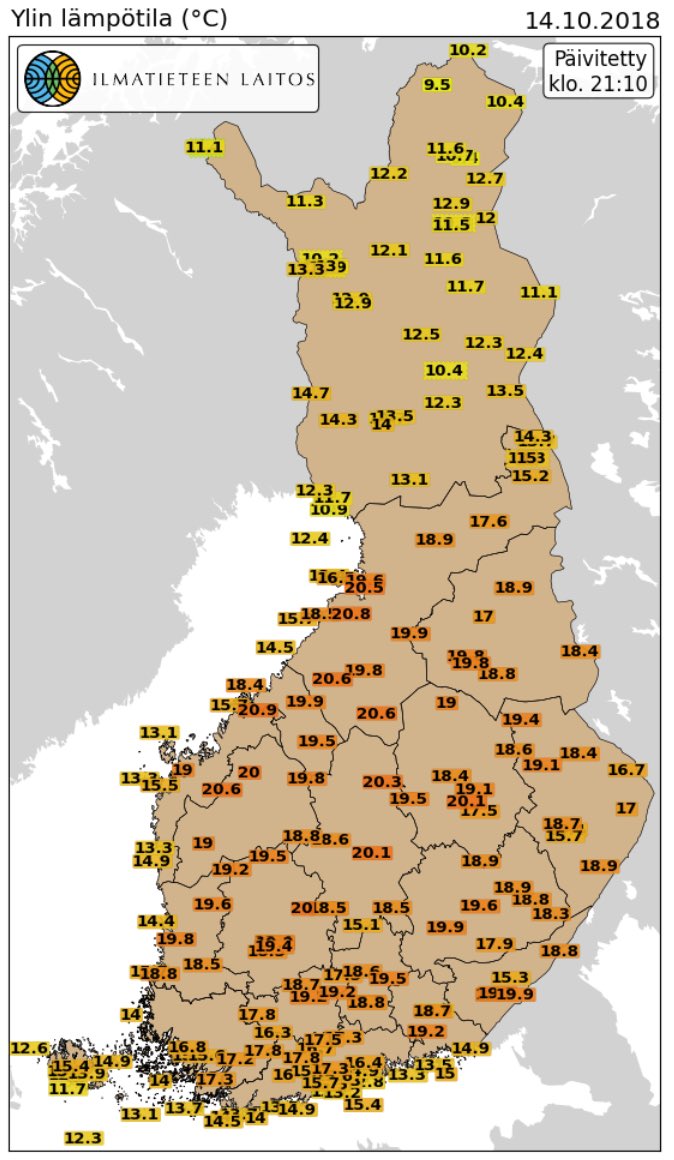