Monday October 15th… Dear Diary. The main purpose of this ongoing post will be to track United States extreme or record temperatures related to climate change. Any reports I see of ETs will be listed below the main topic of the day. I’ll refer to extreme or record temperatures as ETs (not extraterrestrials)😊.  Here is today’s main climate change related topic:

I need to remind all that the Extreme Temperature Diary also takes into account any cold outbreaks as well as heat. Yes, even with increasing global average temperatures due to carbon pollution, the jet stream can still get oriented such that record cold air can occur over areas as large as a continent. We haven’t seen a weather pattern this relatively cold since April 2018 for most of North America and specifically the United States looking at my Record Scoreboard:

I’m estimating that about 500-1000 daily record lows will get reported for October 2018 from the cold shot that spread from Montana to Texas over the weekend:

About one third of the CONUS experiencing daily record low temperatures this morning! 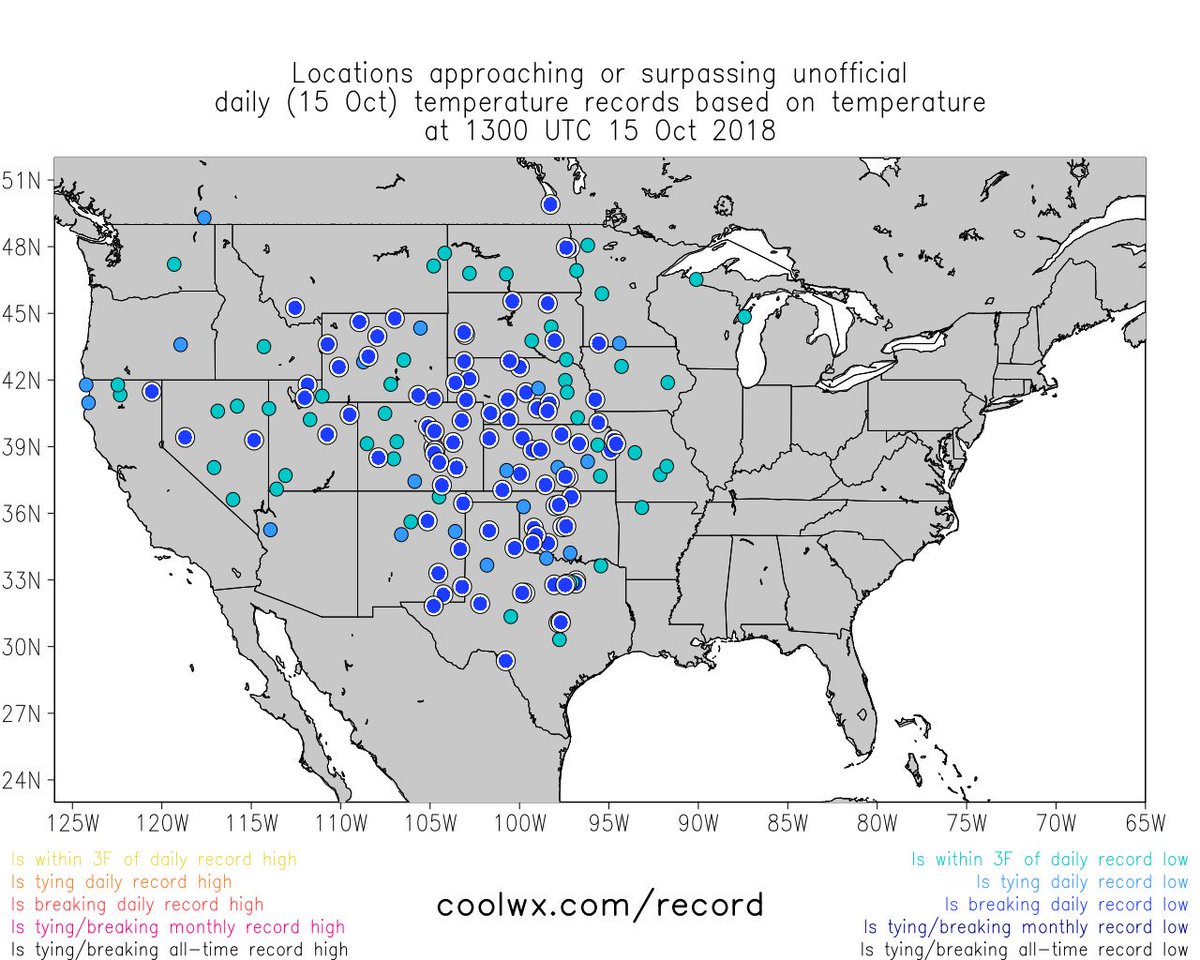 Only 8F in the Nebraska Panhandle. Brrr! That’s very cold for October.
The cold air mass is also producing some outstanding record low maxes and other statistics such as this: 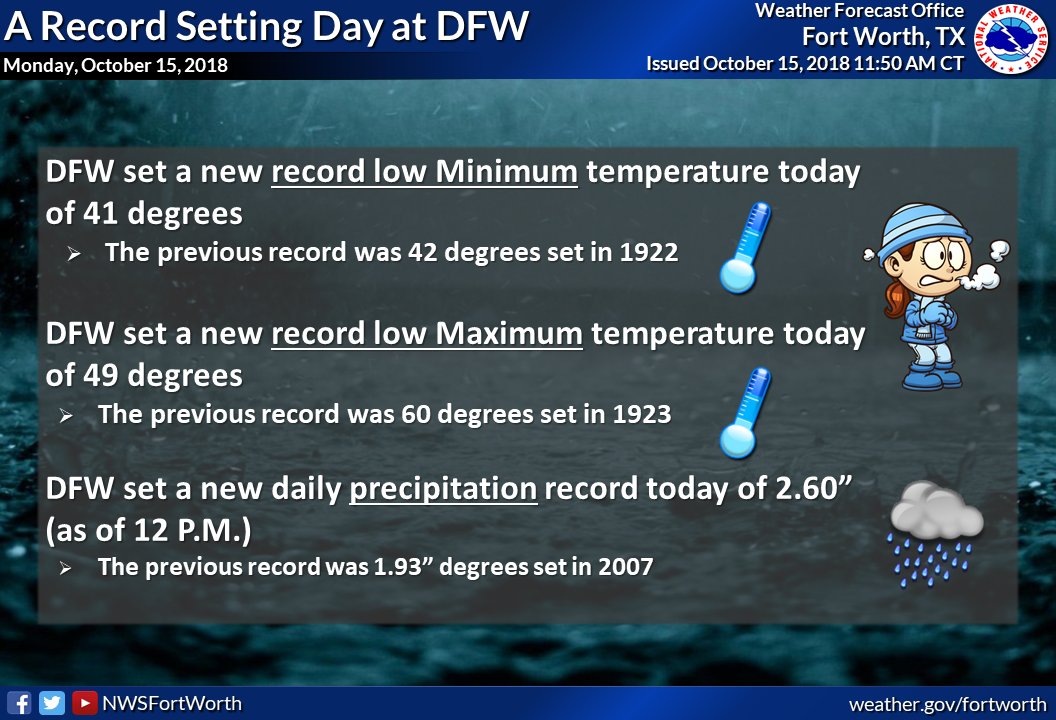 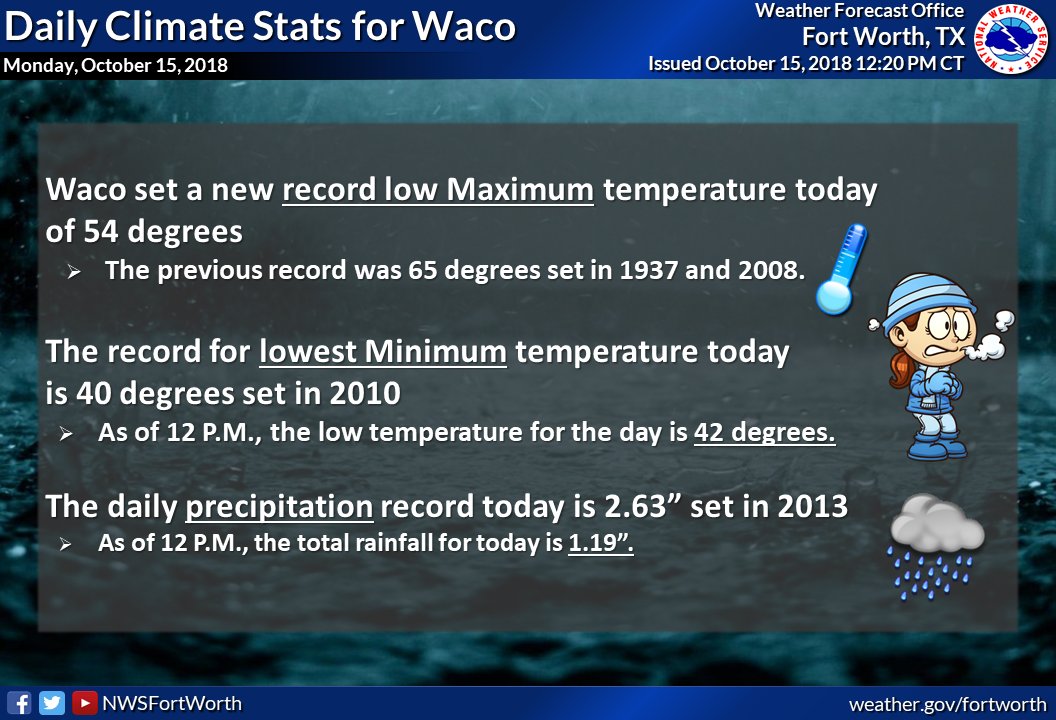 A “November” like front put down a fairly thick layer of snow from the Rockies into the Plains. Sunday at midday we had at 1034 millibar high centered over Wyoming. The higher the pressure moving southward from Canada usually the colder the air mass during  fall and winter. This area of high pressure was also responsible for producing strong Santa Ana winds this morning in California as it built into the Great Basin. Here is one of the end results:

We officially gusted to winds of 73 MPH this morning. You’re favorite tree-hugger is a bit sad to see his tree outside his winder suffer.

Still, it is the cycle of life, and the tree will live.

It’s typical to see snow in the Rockies in October but not at lower elevations going eastward to the Great Lakes as occurred from Saturday into Sunday:

SNOW: rain changes to #snow along I-135 corridor north of Wichita, KS with a winter weather advisory in effect until 2 am for up to a few inches of accumulation. Roads are slippery tonight across central/northern KS. Live from Salina in the morning on @accuweather #kswx pic.twitter.com/lV7RuggGJh 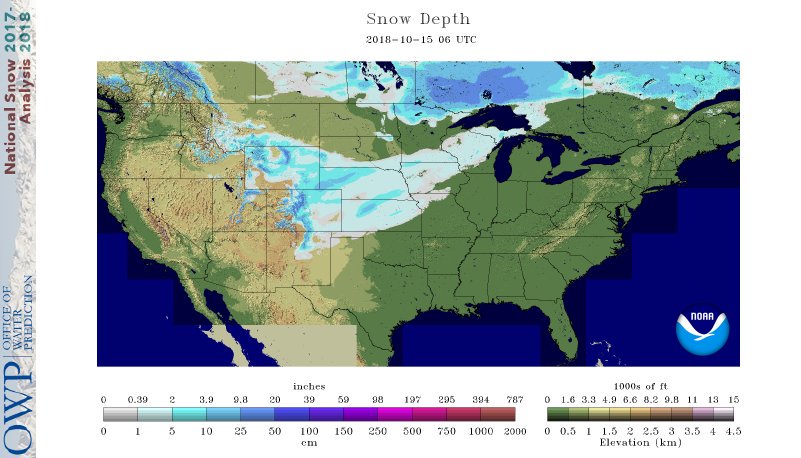 6:12 AM – 15 Oct 2018
Ah. Chris has a big point here. In a world that is warming we would expect to see the Fairbanks snow stat but not those from the Plains. What is happening? The jet is getting highly amplified again being in the following orientation across North America as of this morning:

We’ve had a warm fall so far across Alaska. Today was no different as denoted by a strong, warm ridge poking north into the state as depicted by the Pivotal Weather chart. In North America usually for every action there is an equal and opposite reaction, so we see a cold trough, which is that cold front, digging into the CONUS. Here we see a very convoluted pattern at 500 millibars with the polar vortex undulating wildly with the main cold piece being over Greenland and one big extension digging down towards the Great Lakes. I typically don’t see a pattern this amplified until closer to the winter solstice, which actually might be a sign of a less stable vortex due to global warming.
What’s that? Am I suggesting that this cold October pattern could be partially due to global warming? Yes I am. Also, we will see phenomena like the dipole warming the West and cooling weather in the East as long as the Earth has a polar vortex, which is getting more convoluted looking due to the northward transport of warm air aloft towards the North Pole with each passing year.
Certainly the first cold shot is fairly isolated from the rest of the Northern Hemisphere looking at this chart:

Over the weekend we did see record heat in Scandinavia.

The first cold shot will be petering out over the Plains tomorrow but will produce the first freeze of the fall season for many in the Midwest:

I do expect a few more reports of record lows from the Plains on Tuesday looking at this forecast:

Twenties and thirties will be quite common for minimums from Texas northeast through the Great Lakes.

We are due to see a reverse in the pattern later this month sending shots of near record cold air into the East. The first comes this week on Wednesday through the Great Lakes as the Greenland vortex consolidates:

A deeper, colder through will be digging into the East over the weekend:

The corresponding ridge over the Pacific Northwest that has 500 millibar heights at near record high levels will produce some record warmth through the weekend such as this:

The polar jet has a clear shot from the Arctic all the way south to the Southeast. I’m impressed with the associated polar airmass moving south through the weekend by mid October standards:

We will see the lake effect snow machine turn on across the Great Lakes. That 1030 millibar high may score some record lows from the Plains into the South. On the flip side of things it may get warm enough to see record heat in the Pacific Northwest.

Will this be the pattern for the winter? It’s too early to tell, especially with an El Nino looming in the works. Will climate change deniers jump on this cold pattern to press their points? That’s a definite you bet.

Here is some of today’s climate and weather news:

If you live along the coast and are ever on the fence about whether or not your should leave when a Hurricane is threatening…just replay this women's answer. Interview by @JMichaelsNews pic.twitter.com/HJwtjfUmhh 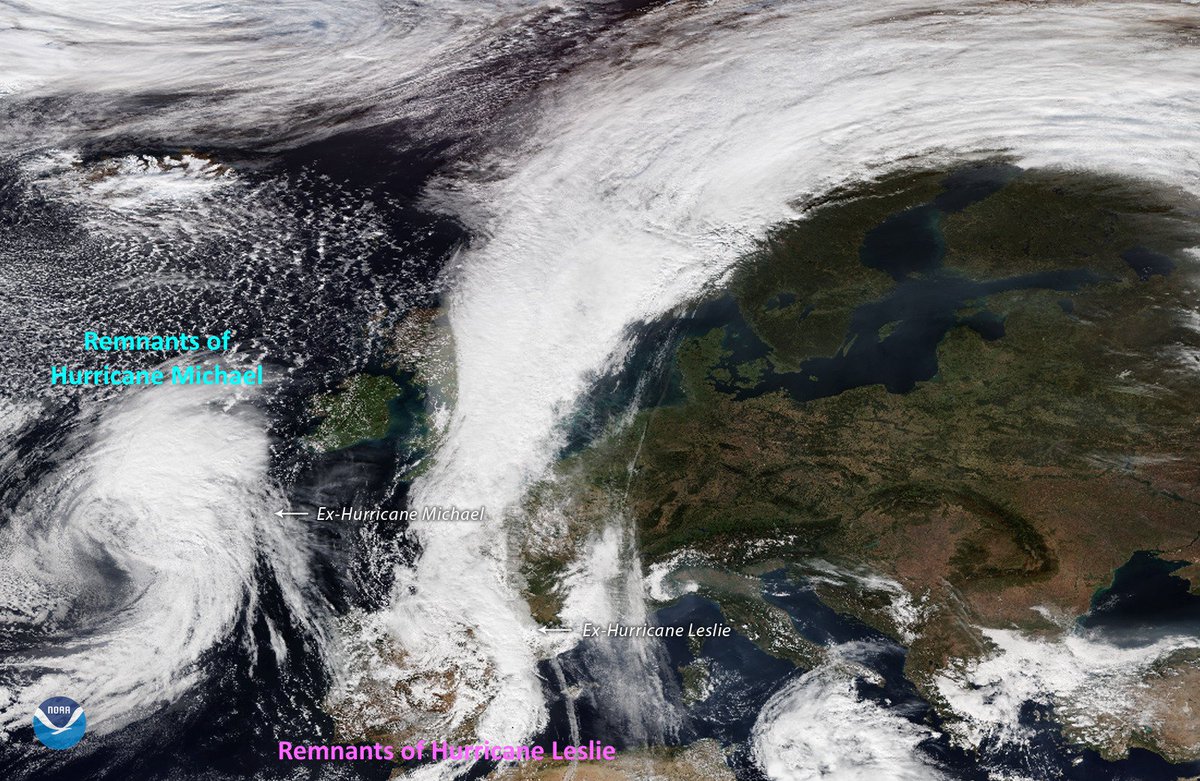 “All of the Big Three automakers—GM, Ford and Fiat Chrysler—have shifted toward big, heavy vehicles that drink more fuel per mile.”

InsideClimate NewsVerified account @insideclimate
The Big Three automakers—GM, Ford and Fiat Chrysler—are in last place for fuel economy among the 13 automakers selling in the U.S. market, according to the EPA
https://insideclimatenews.org/news/15102018/automakers-gm-ford-pickup-suv-electric-vehicle-emissions-standards-climate-change-industry-bailout
2:35 PM – 15 Oct 2018

“President Trump Just Questioned Human-Made Climate Change In A TV Interview. Scientists Are Disturbed And Disappointed” by Zahra Hirji (@Zhirji28) for The @TheDailyBeast: 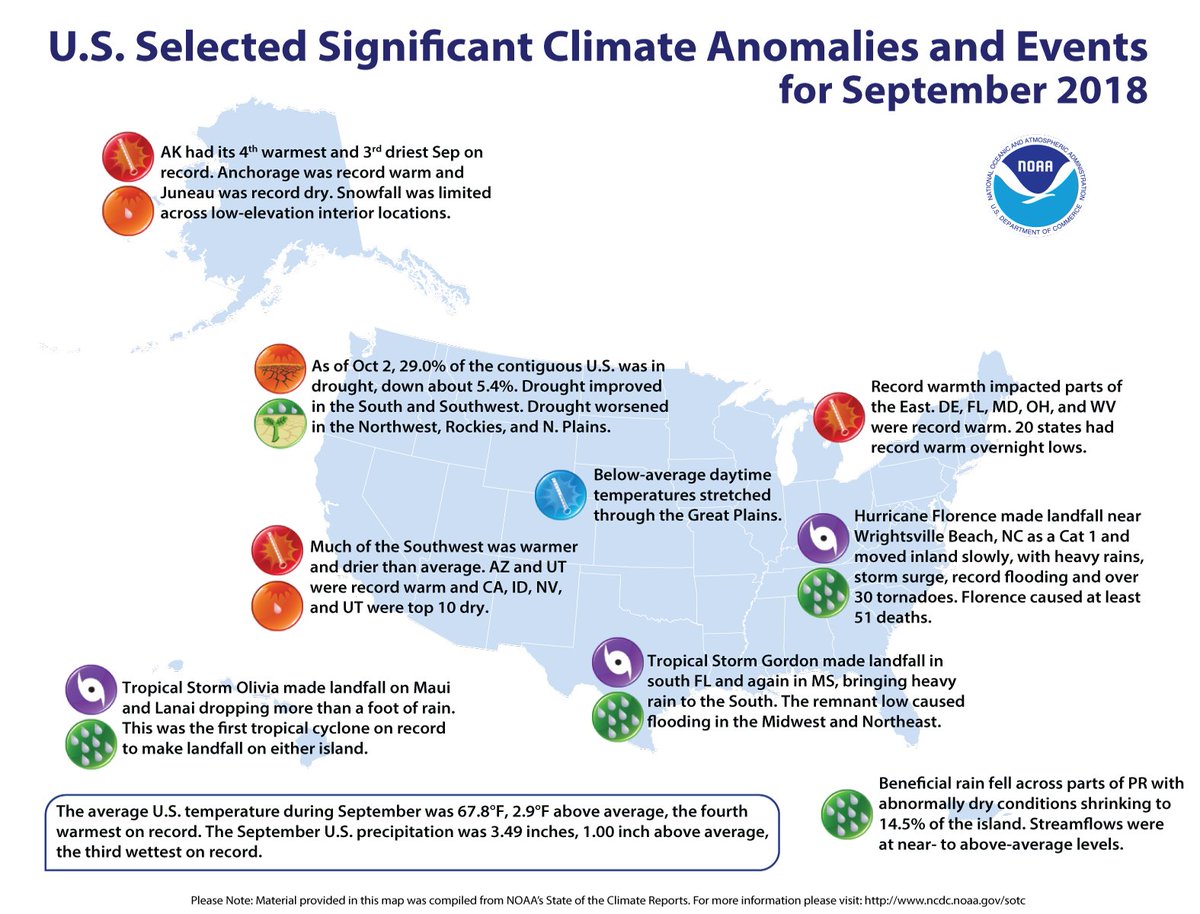 Here are some of those not so world famous “ET” reports:

El Paso’s high temperature today was only 54 degrees, which occurred at midnight LST. That is 25 degrees below normal for this time of year. It also broke the record for the coldest maximum temp to occur on this day, 10/15. The previous record was 61 degrees set in 1970. #txwx 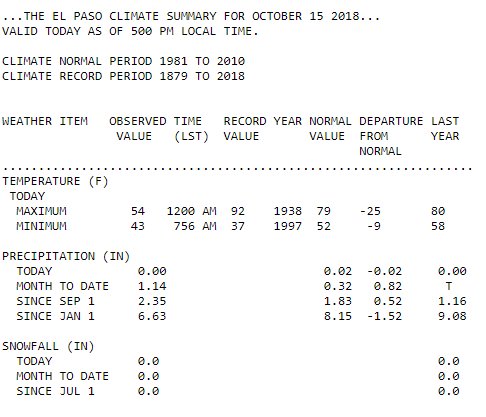 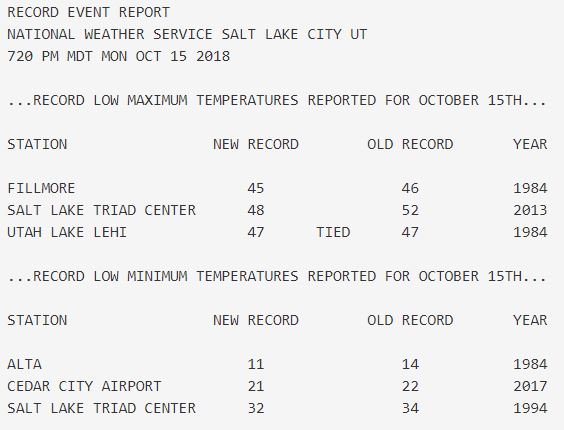