About once a year I trot out this idea knowing that I have new followers who might A) be interested and B) have connections with those who might have the resources for research. Many might not know of my own inroads in association with climate science, which this old piece shows…not that I want to pat myself on the back, but continue developing the science in association with extreme temperature or record events for climate change science purposes. After all, record heat and even record cold due to the dipole pattern reemerging this week are one of the biggest problems with climate change, which I think can be measured and catalogued better.

So, without further ado, here is a repost of the article Category 6 Weather Underground article advertising the Extreme Temperature Index:

The Extreme Temperature Index: Identifying Which Records are Most Significant

Our guest author today on Category 6 is Guy Walton, an independent meteorologist in Atlanta who spent more than 30 years as a forecaster at The Weather Channel. For more than a decade, Guy has kept detailed records on U.S. daily, monthly, and all-time record high and low temperatures across the United States. His efforts helped lead to NOAA’s establishment of its U.S. Records site. In 2009, Guy coauthored a high-profile paper in Geophysical Research Letters with lead author Gerald Meehl (National Center for Atmospheric Research), showing that U.S. daily record highs have increasingly outpaced daily record lows since the 1980s. Guy’s work can be found on Twitter (@climateguyw) and on his new website, Guy on Climate (not to be confused with an unrelated site called “Climate Guy”).

In 2007, when Bob Henson and I were first discussing the potential for a new climate study based on U.S. ratios of record surface highs to lows, we thought that it would be fantastic to engineer an index that would allow for ranking, rating, and comparing individual tallies.

Up to now, I’ve carried out my research without such an index. My most recent analysis uses record ratios to show that U.S. nights are actually warming faster than days, most likely due to carbon pollution interacting with moisture.

Studies like this one pit one tally of a set record against another. One problem that Bob and I recognized early on is that a report, or tally, of a surface record could be a tied record coming from a station with only a period of record (time that a station has been reporting reliable temperature measurements) of 30 years, or a report from a station with a period of record well over 100 years breaking an old record by several degrees. So we have been proverbially comparing apples to oranges.

Bob and I thought there ought to be some simple mathematical index taking into account variables hidden in those individual record tallies. The first two variables were obvious: (1) the period of record, or the length of time that regular observations have been collected at a given location, and (2) the difference (e.g., degrees Fahrenheit) between the old record and new. Bob also thought that the difference between the average maximum and minimum at each location on each given date is a factor and should be built into an algorithm or index. The name we came up with is the Extreme Temperature Index (ETI).

Figure 1. In the United States, record highs have outpaced record lows by an increasing margin since the 1980s. Shown here are the annual ratios of daily record highs to daily record lows for each year since the 1920s, when enough reliable data had accumulated to begin calculating such ratios. The only two years this century with more record lows than highs were 2013 and 2014. Image credit: Climate Central.

How the ETI works

Think about this: During the middle of the summer at Miami, FL, the average low is near 80°F while the average high is near 90°F, so the average diurnal temperature spread there is 10°F. Miami has a marine climate while Des Moines, IA, has a continental climate. The average low at Des Moines during that same midsummer day may be 60°F with a max near 85°F, or a spread of 25°F. Because of these differing spreads, it should be easier to exceed a record high or low by a margin as large as, say, 2°F in Des Moines versus Miami. Therefore, a useful ETI will generally weigh a statistical tally higher for a record set in a more marine environment than in a continental one, or at a lower-elevation site versus a higher-elevation one. These factors do not have to be explicitly added, though; they are incorporated automatically because of their influence on the average diurnal temperature spread.

Dr. Bruce Rose, a good colleague of mine at The Weather Channel for more than a decade, came up with an initial algorithm for the ETI:

The ETA would work in either degrees Celsius or Fahrenheit. The beta exponent, which could be used to calibrate the ETI for monthly and all-time records, can be neglected here.

Using some simple mathematics, one can see how the ETI might work. All else being equal, the ETI will increase as n, the period of record, increases. The ETI will also increase in line with the magnitude of the difference between an old record and a new one. And if the average diurnal range of temperature gets larger, then the ETI number gets smaller.
The following are a couple of examples from the hot summer of 2007 calculated from the ETI algorithm. The periods of record shown here are for specific reporting sites as of 2007, rather than for the two cities as a whole.

An idea ready for research

By 2009, we had the framework for the ETI in hand, and off we went to do a scientific paper, right? Eh…wrong. All of us had competing priorities, and to be honest, I lack the mathematical and statistical skills to produce such a paper. I have brought the ETI concept to many individuals who love the idea of ranking records but who have also been too busy with other priorities to take on this project. So, if any graduate student or other individual wants to take a serious look at the viability of the Extreme Temperature Index, just contact me or Bob, and you have our blessing.

The more direct way of judging a record hot or cold event is its standard deviation from average (also known as its sigma value). These can be evaluated locally or across a region. For example, the Russian heat wave event of 2010 was deemed a “three sigma” event, or a very rare hot event far outside of norms or averages. An interesting alternative way for ranking a heat wave, if enough long-term observations are present, would be to take all the deemed tallies of records of said event and put them through the ETI algorithm. The local results could be added and then divided by the number of tallies to produce a regionally averaged Extreme Temperature Index (ETI) for that heat wave. Such a method could allow climatologists to better compare events from different eras.

WU weather historian Christopher Burt and I have envisioned a great repository of surface records from the entire planet. Based on this dataset, each new record would have its own calculated ETI to help meteorologists and climatologists better compare cold or hot events. The U.S. Records site (NOAA/National Center for Environmental Information), where I get my tallies, is a good start. By using some sort of ETI, I believe it could be vastly enhanced.

Any serious work on the ETI could prove to be both a personal opportunity and beneficial to science. For those who are interested, have at it!

Here are a few weather and climate items from today:

As the climate changes the world's climate zones will shift around. This model shows the projected change from 1976 until 2100. Russia stands to profit from global warming.

A westward-shifted El Niño is expected to shape the upcoming U.S. winter in some interesting ways. https://bit.ly/2PaxRb4 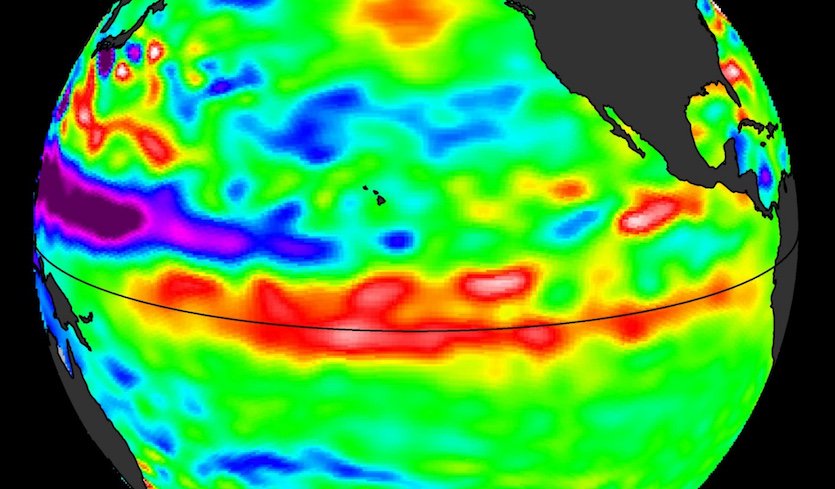 nothing inconsistent with @ametsoc climate statement, and in line with other science organizations. Even strikes a tone of collaboration. Great job AMS 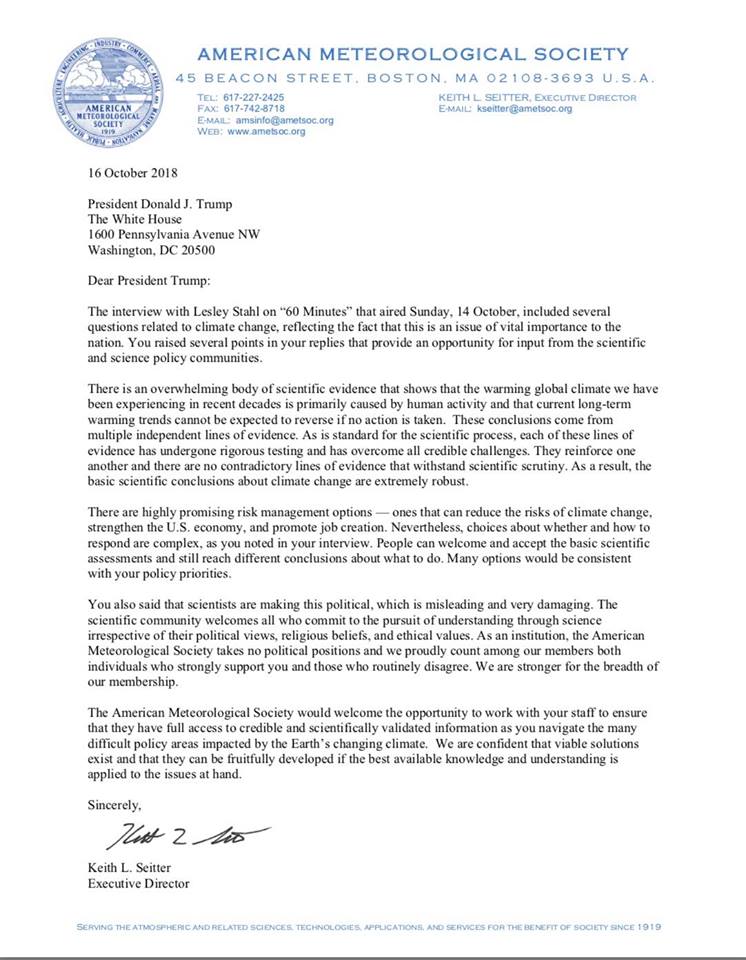 How #hot has it been in #Florida?? Well, #record hot so far this #October! Look at where these locations fall within the ranks so far this month… Good news is, a cold front will bring relief THIS weekend! Send @TomNiziol your questions using #WUTV. #FLwx 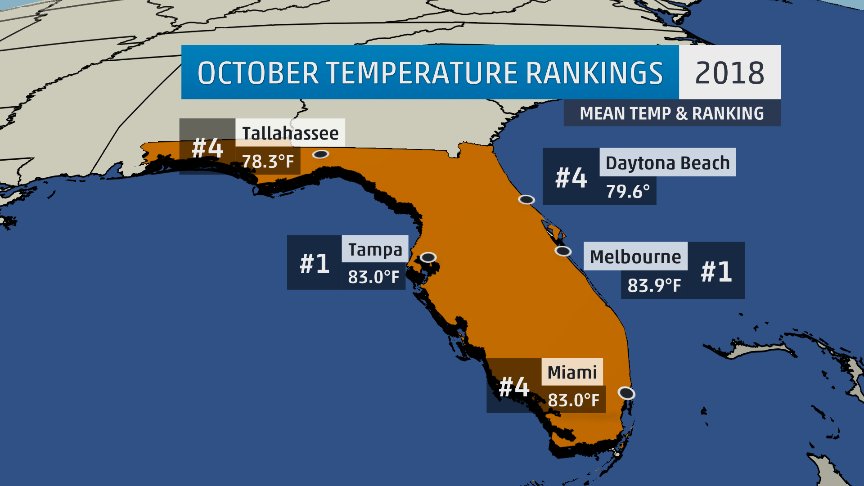 Since Sep 1, Anchorage average temp is 52.9°F (7.7°F above normal). The 52.9°F temp would be above normal even for all of Southeast Alaska (Juneau, Ketchikan, Annette Is.). It would also be above normal for Duluth, MN, Lewiston, MT, and Caribou, ME. #akwx @AlaskaWx