Today I’m going to address yet another psychological reason why so many among the vast, colorful quilt of human society deny that there is human induced climate change. Let’s define confirmation bias:

In psychology and cognitive science, confirmation bias (or confirmatory bias) is a tendency to search for or interpret information in a way that confirms one’s preconceptions, leading to statistical errors.

“Confirmation bias, also called confirmatory bias or myside bias,[Note 1] is the tendency to search for, interpret, favor, and recall information in a way that confirms one’s preexisting beliefs or hypotheses.[1] It is a type of cognitive bias and a systematic error of inductive reasoning. People display this bias when they gather or remember information selectively, or when they interpret it in a biased way. The effect is stronger for emotionally charged issues and for deeply entrenched beliefs. Confirmation bias is a variation of the more general tendency of apophenia.”

“People also tend to interpret ambiguous evidence as supporting their existing position. Biased search, interpretation and memory have been invoked to explain attitude polarization (when a disagreement becomes more extreme even though the different parties are exposed to the same evidence), belief perseverance (when beliefs persist after the evidence for them is shown to be false), the irrational primacy effect (a greater reliance on information encountered early in a series) and illusory correlation (when people falsely perceive an association between two events or situations).”A series of psychological experiments in the 1960s suggested that people are biased toward confirming their existing beliefs. Later work re-interpreted these results as a tendency to test ideas in a one-sided way, focusing on one possibility and ignoring alternatives.”

“In certain situations, this tendency can bias people’s conclusions. Explanations for the observed biases include wishful thinking and the limited human capacity to process information. Another explanation is that people show confirmation bias because they are weighing up the costs of being wrong, rather than investigating in a neutral, scientific way. However, even scientists can be prone to confirmation bias.[2]“

I must admit that the old Climate Guy was guilty of having confirmation bias when I got angry enough to start cataloguing counts of record temperatures beginning on 1/1/2000 to help confirm to my coworkers that I had the correct “view” that anthropogenic global warming was occurring. My confirmation bias did become fact, though, after about ten years of patience. It turned out there was a 2 to 1 ratio of record daily high temperatures to lows during the decade of the 2000s for the United States. Good science can start out by an individual with a preconception tracking a statistic; but becomes bad science if any trend, once established, gets twisted in denial. True science will eventually squeeze out facts like the Earth being round or not being the center of the Universe. What if false graphs and charts are used, though, to try to confirm that carbon pollution is not warming the planet?

Some highly intelligent scientists to this day just can’t come around to the “belief” that man can greatly influence if not destroy the environment of the Earth. I’ve known them. Two main founders of the Weather Channel, one a highly successful businessman, John Coleman now deceased; and the other who purports to be a climate science denialist, Joe D’Aleo, have shown confirmation bias.

This is not to write that these two highly respected individuals weren’t great to be around at diners or bad, unfriendly human beings, just flawed because of basic human psychology. The day that Joe was let go from The Weather Channel during the 1980s he gave me a swag TWC ice scraper fighting some tears in the parking lot, which I have kept as a memento of good times. I’ll always remember that moment since, despite facing an awful personal change in Joe’s life, he was able to say goodbye to another human being, and yours truly at the time who was just a lowly meteorology technician.

Let’s look at the case of Dr. Joe D’Aleo from Wikipedia:

D’Aleo has become a leading figure[according to whom?] in the debate over man-made climate change.[citation needed] After hacked emails by and to Phil Jones, director of the Climatic Research Unit (CRU) at the University of East Anglia (UEA), were made public in November 2009,[16] D’Aleo was a major participant in the resulting controversy.[citation needed][17][18]

In 2008, D’Aleo published a list titled “12 Facts about Global Climate Change That You Won’t Read in the Popular Press”,[19] including the following claims:

I’ve known Joe to write articles stating that most surface temperature observations are flawed due to encroaching urban heat island effects on most stations. I can assure all reading that all are calibrated to rigorous standards, and that city effects can’t be increasing significantly enough to affect my own record findings or more broadly NOAA climate reports based on surface temperature averages. Back in the decade of the 2000s the first statistical twist for denying that global warming was occurring that I knew of coming from Joe was the “station  instrument flaw” excuse. More from Wikipedia:

In a December 2009 article, D’Aleo wrote that “The Climategate whistleblower proved what those of us dealing with data for decades know to be the case — namely, data was being manipulated. The IPCC and their supported scientists have worked to remove the pesky Medieval Warm Period, the Little Ice Age, and the period emailer Tom Wigley referred to as the ‘warm 1940s blip,’ and to pump up the recent warm cycle.” While much attention had been paid to “the emails dealing with Michael Mann’s hockey stick and other proxy attempts,” and especially “to the email about the ‘trick’ and the effort to ‘hide the decline,’” D’Aleo wrote that he was in fact “more concerned about the coordinated effort to manipulate instrumental data… to produce an exaggerated warming that would point to man’s influence.”[20]

D’Aleo asserted in a January 2010 report with E. Michael Smith that, in addition to the “deceptions” of the CRU, researchers at the National Climate Data Center (NCDC) in Asheville, North Carolina, and the NASA Goddard Institute for Space Studies (GISS) at Columbia University in New York City had also manipulated climate data, in order to claim that 2005 was the warmest year on record. “When the differences between the warmest year in history and the tenth warmest year is less than three quarters of a degree, it becomes silly to rely on such comparisons,” said D’Aleo, who called the claimed manipulation a “scientific travesty” committed by activist scientists to promote a global-warming agenda.[8][21][18]

Also in 2010, D’Aleo and Anthony Watts published a book-length report entitled Surface Temperature Records: Policy Driven Deception? In the report, which they described as “a work in progress,” they analyzed worldwide temperature records and concluded with the claim that the systematic manipulation and exaggeration of instrumental temperature data by leading meteorological institutions makes it impossible to say whether or not there was a significant amount of global warming in the 20th century.[17]

Think of a scene that people typically envision of a scientist boiling a chemical in a beaker. Let’s say that if the fluid changes to a red color from an outside stimulus that the scientist’s theory or “scientific view” is confirmed. Now let’s say that if the fluid in question changes to a blue color that the scientist’s theory is shattered. If the scientist is really a true scientist he will state that his prior theory is wrong and press on developing different hypotheses to better explain what he is seeing  in nature.

Now let’s write that this scientist can’t come to terms with the fluid turning blue, not wanting to embarrass himself due to prior false writings and suppositions made in public. This scientist, after all, is a flawed human being as are all of us. This scientist might blame the beaker’s materials for turning the fluid blue. Perhaps he might say or write that there is something in the air giving the experiment his unexpected results. The scientist because of confirmation bias just can’t come to admit that he was in error. As far as global warming goes Joe D’Aleo has been looking for excuses to deny climate science for years, unfortunately, due to psychological confirmation bias.

In my own case if there was a better world in which there was no global warming after starting my record count study on 1/1/2000 when would I have given up the ghost, admitting that there was no clear trend towards warmth; and therefore, no way that CO2 was not warming the planet detrimentally? Would I have manipulated my stat files? I hope not. I think that I would have just slinked off into my little hole after a decade or so by 2010, admitting that I was wrong. That’s the problem here. It’s not often that we as adults of any stripe can quickly change a view based on a false presupposed belief that contradicts what we think is natural law, or even when science encroaches upon spiritual facets of our makeup.

Both Joe D’Aleo and John Coleman come from an older generation than mine. I find that it is much easier for my generation and those younger to come to terms with current climate science. Unfortunately, we don’t have the time to allow for all individuals of every generation to wrap their noodles around what is seen in nature, which is increased global warming, go through the five stages of grief, then act in consensus unison. We as a planet must act now.

So, I have come to the conclusion that contrary voices, while not being muted because of freedom of speech, must be ignored for the sake of civilization. Can Joe and others live with themselves not admitting that they were wrong? By their denial delaying action can they live with themselves perhaps knowing deep down that they have been complicit with wrongdoers, which are some individuals in companies like Exxon? Will their brains become warped to psychologically justify any prior articles and papers, which is the very definition of confirmation bias? As we see the planet’s temperature continue to rise through the 2020s we will see how many peel off the denial camp. For some who want to retain good legacies for posterity I hope it is not to late for a change of heart.

As the evening progresses I will add a few weather and climate articles from Thursday:

Officially we have already had 10 category 5 tropical cyclones in 2018. This is consistent with the predicted effects of climate change. Urgent action is needed now to reduce current GHG levels #stayinformedcc #wutv #climatechange #globalwarming https://youtu.be/PHk1jX8YpG8 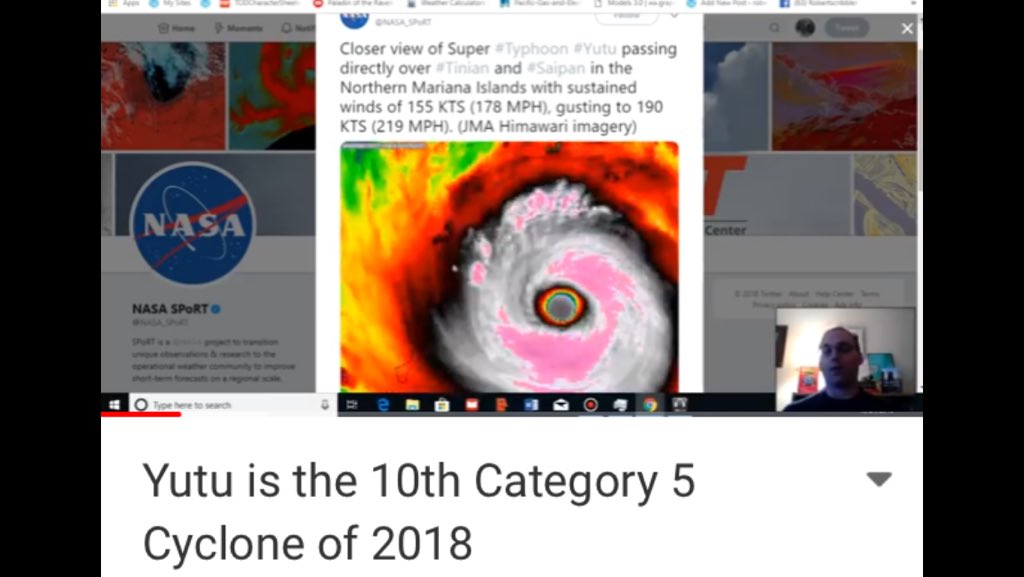 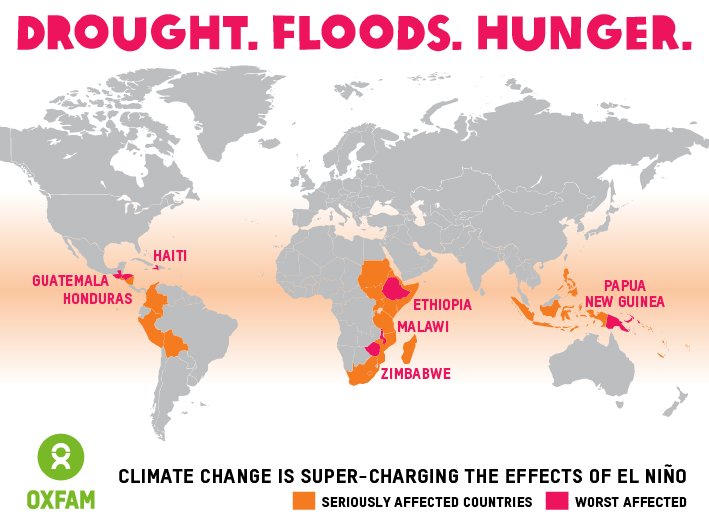 Friday night will be a good one to stay in and curl up with a good book in the Mid-Atlantic. Details: https://t.co/Xt9QVK5XKQ pic.twitter.com/WS36KyBvrO